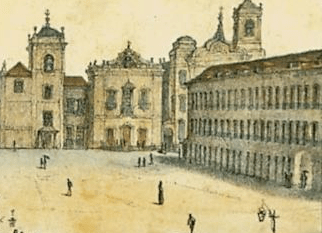 The  Largo do Paço square and the surrounding area was home to large-scale traders, who made fortunes in the transatlantic trade, importing European goods and slaves and exporting colonial commodities. One of these, Antônio Teles, built a block of houses in front of the palace, which he rented out to merchants. For access to the fish-market just behind, he opened a passageway with a great arched roof in stone, typical of 18th-century Portuguese buildings.

The space under the arch, protected from the rain, became a shelter for slaves from Angola and Benguela, who played there their musical bow, the urucungo, as described here by the chronicler Mello Moraes: “Old troubadors from Benguela and Angola, in rags, naked from the waist up, placed against the black and wrinkled skin of their stomachs their marimba gourds and the coconut shell of their urucungo bows, the sound of which delighted their fellow countrymen.”

Capoeira also was practised at the Largo do Paço Square, renamed Paço Imperial after independence (then Praça Quinze de Novembro – 15th November Square – known now as ‘Praça XV’). Its quayside was the haunt of the Marinha capoeira gang, who hung around the docks. As they were located near to the Carpenter gang, based at Saint Joseph’s church, they allied themselves with the Three Bunches [of Grapes] gang at Saint Rita’s church. The square thus became a borderland between the rival Guaiamu and Nagôa federations of capoeira gangs, and the scene of violent confrontations with sticks and jackknives. Capoeira was heavily repressed here when the Paço Imperial became 15th November Square in celebration of the proclamation of the Republic in 1889. Even thereafter the square continued to give headaches to the authorities, who still in 1930, considered the Cais Pharoux  and 15th November Square to be ‘locations infested by all sorts of vagabonds’ (quoted in Colchete, Praça XV, p. 56).

There is still capoeira at the Teles Arch today. But it is an open circle (roda), where comrades meet and new friendships are made, all followed by the customary samba-de-roda. The Teles Arch roda takes place every second Saturday afternoon of each month, organised by Contra-mestre Fábio Chapeu de Couro and Alessandra Morioka (‘Japa’).

This roda is the starting point of the 360 clip you can watch here:

We were lucky to count with the participation of some of the most reknown masters of Rio de Janeiro, such as M Camaleão, M Levi e M Cobra Mansa, and many others.

This is one example only of the rich history of capoeira in Rio de Janeiro.