Rio de Janeiro had the most developed capoeira of all Brazilian cities during the nineteenth century. Originally developed by enslaved Africans and Creoles, it spread to the lower free classes during the course of the century. Maltas, or capoeira gangs, formed on a territorial basis around church squares and surrounding neighbourhoods. During the latter part of the Brazilian Empire, these maltas congregated in two overarching federations, the Nagoas and the Guaiamus. The Nagoas allied with the Conservative party, and the Guaiamus with the Liberals, helping them to rig elections. For this reason, the new Republican regime clamped down on the capoeira gangs after the proclamation of the Republic in 1889. Hundreds of known capoeiras were arrested and deported to Fernando Noronha, a distant Atlantic island, and other locations. Capoeira practice and gangs were outlawed by the new Republican Criminal Code. Practitioners could be sentenced to prison and forced labour for sixth months, and even stronger penalties were prescribed for gang leaders. 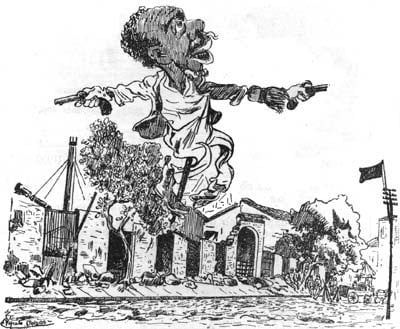 Capoeira disappeared from the streets of Rio de Janeiro. Yet how much of it survived in more discreet locations is a matter of controversy. Some claim that capoeira fighting techniques were still passed on in popular neighbourhoods or favelas. Prata Preta, a leader of the anti-vaccination riot in 1904, relied on his capoeira skills to defend the barricades of his neighbourhood in the port area (represented left, in a caricature from the magazine O Malho).

Some of the bodily techniques were recycled into batucada, or pernada carioca, a game that accompanied informal samba circle performances. A number of techniques, mainly kicks, started to be taught in martial arts academies by people like Jaime Ferreira and Sinhozinho in the 1930s. And many vagrants (malandros) used capoeira techniques in street fighting. By far the most famous of these is Madame Satã. This story is the topic of Lobisomen’s cordel poetry, which you can download here. Sete Coroas was another famous malandro, supposedly one of Satã’s teachers. His history has been thoroughly researched by Rómulo Costa Mattos of the Catholic University in Rio (PUC), who kindly agreed to allow his article to be published on our webpage.

African-derived practices did not develop only in urban environments. The coffee plantation area in the interior, along the Paraíba Valley, is famous for its belly-bounced circle dance, the jongo. Less know is the stick-playing (jogo do pau) that was common among the same black communities of the Brazilian “Valley of Slavery.” After emancipation, free workers on estates continued stick-playing into the 1970s, when the practice declined. Jogo de pau not only features stick attacks and defences, but also sweeping kicks and negativas, as in capoeira. This film (2009, 37 mins) documents stick-playing in the Parnaíba Valley:

History: Stick Playing in the Afro-Brazilian Culture of the Paraíba Valley from University of Essex on Vimeo.