Paulo Gomes da Cruz was born on January 25th, 1941 in Itabuna, southern Bahia – a cocoa region and native home of writer Jorge Amado. He moved to Rio de Janeiro like many other Bahians who, according to Iphan (BRASIL, 2007), came looking for better life opportunities.

In the carioca capital, he learned capoeira from Mestre Arthur Emídio, who was also from Itabuna and who had a capoeira academy in Bonsucesso, a suburb north of the city centre. There, he trained and graduated as a Master along with other important names such as Leopoldina, Celso do Engenho da Rainha and Djalma Bandeira. It was at this academy that he came to be respected and known as Mestre Paulo Gomes, his capoeira baptismal name. His genealogy in capoeira is as follows: “Son” of Mestre Artur Emídio (1930-2011), “Grandson” of Mestre Paizinho (Teodoro Ramos) and “Great-grandson” of Mestre Neném (MACHADO, 1998).

In the 1960s, Mestre Paulo Gomes moved to the Baixada Fluminense, or more specifically to São João de Meriti, in the Coelho da Rocha neighborhood. It was in this district that he began to teach capoeira and to instruct capoeiristas, among them Mestres Valdir Sales (1942-2019) and Josias da Silva, who became his main disciples and established important academies in the Baixada, respectively the Capoeira Association Valdir Sales, in the municipality of São João de Meriti, and the Capoeira Josias da Silva Association, in the municipalities of Nova Iguaçu and Duque de Caxias. 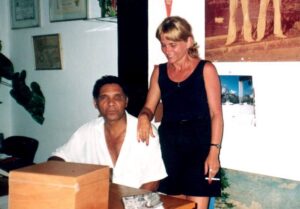 Mestre Paulo Gomes and his wife, Aureliana, in his academy in São Paulo. Source: Machado, 1998.

In another chapter of his life, Mestre Paulo Gomes went to live in São Paulo and there, just as in the Baixada Fluminense, he was one of the founders of a capoeira community, where he created the Capoeira Centre Ilha de Maré and, in 1985, the Capoeira Association of Brazil (ABRACAP). Mestre Paulo Gomes was also an advisor to the former governor of São Paulo Mário Covas, helping to establish the State Law nº 4.649 on August 7th 1985, which defined August 3rd as a “Capoeirista Day” in the State of São Paulo.

Mestre Paulo Gomes met a tragic death in 1998. He was murdered at age 57 in São Paulo inside his capoeira academy Ilha da Maré. The motive for the murder had been a debt the master owed to a car rental company (Folha de São Paulo, 1998). According to the testimony by Mestre Ribas Machado (1998):

It was at night, when the class had just ended and many students were changing in the locker room, when a bailiff, accompanied by another man, for reasons that only those who were there know and can speak of for certain, unloaded his weapon at the Mestre who, after a while, was taken to hospital, but he did not survive… During the tragic occurrence, two other capoeiristas were lightly wounded while trying to appease the situation, and they are Mestre Fernandão (ABRACAP leader at the time and traditional capoeirista at the Praça da República Roda in São Paulo) and Cristhiano, a capoeira graduate.

Mestre Paulo Gomes’ wake was held in the academy hall, full of homages from fellow capoeira masters, who gave speeches and held a roda in honour of the Mestre. Again according toMestre Ribas Machado:

Then we all went to the São Pedro cemetery (located at Francisco Falconi Avenue, 837 – Vila Alpina – São Paulo) and there, in the presence of more Mestres and capoeiristas (who had been gathering since the wake), the body was buried to the sound of cries, capoeira songs, [chulas], prayers and berimbaus …

Mestre Paulo Gomes is greatly missed in the world of capoeira, with acknowledgments and contributions given by his disciples for the memory of capoeira, such as the 1982 book “Capoeira: Brazilian Martial Art” and the CD “Roda de Capoeira da Ilha de Maré”.