I met Leopoldina in 1965, at the age of 18. He was 31 and, and despite being in great shape, full of energy, with a lean and muscular body that was very toned, his face looked like that of a much older man. The curious thing is that as the years passed, his face and body remained almost the same.

I was attending the UFRJ (Federal University of Rio de Janeiro) School of Engineering, located on an island in the Guanabara Bay called Ilha do Fundão. Leopoldina taught capoeira in Atlética, the sports department there.

Leopoldina was kind and friendly to students. He did not allow an older or more experienced student to hit a beginner. He carried the most interested of his students to samba, candomblé and umbanda, to the hills and to the carnival parades on Avenida Presidente Vargas.

He was a great Master without even trying to be one, who introduced those university students, myself among them, to Brazilian “popular” culture; to the philosophy of high-spirited roguery – “good business is good for everyone” (as opposed to the so-called Gérson Law, “I take the best from all”, the 171 fraudsters and ordinary scammers); and with a radical and revolutionary approach towards women and sex as compared to bourgeois morality and sexist approaches: “No one belongs to anyone”. 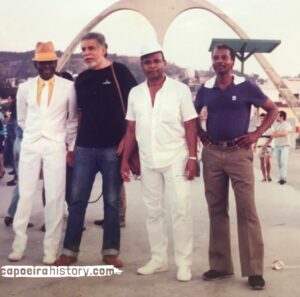 Leopoldina thought that capoeira classes should only be taught twice a week, and that they should last one hour; the rest of the time would be for rodas and games.

His teaching method consisted of a brief warm-up (a run around the room and some jumping jacks), some strikes and counter strikes in pairs of students (similar to those he learned from Artur Emídio, who in turn based this on Mestre Bimba’s exercises). Occasionally there would be training of kicks, with students approaching a chair in a row and giving a blow over the chair one by one, and at the end of the class, there would be a fifteen to twenty minutes roda. The classes generally had four to eight students. Leopoldina has never been what would be considered “successful” in terms of student numbers, nor did he teach for more than five years in the same location.

In fact, when I met him in 1965, although he was known and beloved amidst capoeira practitioners, Leopoldina was not as renowned as Artur Emídio was or, later, the Senzala capoeira group. His fame grew slowly over time, on the trips he constantly made to São Paulo and on the friends he made among the Grupo Senzala, which became hegemonic in Rio at the time. This was mainly due to his high-spirited and positive personality, as he was someone who only made friends and avoided enmities, and was liked even more for his capoeira songs which, while being inventive with the lyrics and especially in harmony, appealed even to the players that wanted to remain closest to tradition.

Gradually, his figure began to be associated (and rightly so) with the last of the “good rogues” and Zé Pelintra himself, a spiritual entity from the Afro-Brazilian religion Umbanda.

In 2005, when he was over 70 years old, he was still in great physical shape, playing at a fast pace with four or more young capoeiristas, one game followed by the next. He was one of the best-known masters of our time, along with Mestres João Pequeno and João Grande (former students of Mestre Pastinha from Salvador).

His greatest interests were women, capoeira, samba, big cars (which he bought and equipped with a lot of chrome and painting), trips around Brazil and abroad (where he started to go around 1990), parties, friendships – in short, he enjoyed the small pleasures of life.