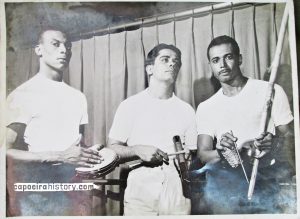 Genaro Raimundo Coelho was born in the Nazaré neighborhood, in Salvador, Bahia, on the 21st of June 1934. He came to Rio de Janeiro with his family at a very young age, and they settled in the Bonsucesso neighbourhood. However, at the age of 10 he had to return to his birthplace, where he started to work. After a lot of struggle trying to find a job in Salvador, he returned to Rio de Janeiro, at the age of 19, and went to live with his godmother in the Higienópolis neighbourhood in the hope to get better professional opportunities.

As soon as he arrived, he joined the army, and it is around this time that he met Mestre Artur Emídio, who was living on the nearby Avenida dos Democráticos at the time. Meeting with Emídio, Valdemar Santana and others, at the top of “Rio Novo” pharmacy, these young men shared an interest in capoeira and other martial arts. Frustrated with his defeat in the fight against Robson Gracie, Artur was motivated by his friends to teach capoeira. Mestre Genaro became his student and participated in capoeira presentations from 1955 onwards, the first being at the Christian Association of Young Men, ACM (Associação Cristã de Moços), in the Lapa neighbourhood. With Artur Emídio, Djalma Bandeira and Vilela, he participated in the show “A Noite dos Escravos” (The Night of the Slaves), on TV Rio, in 1957, invited by Haroldo Costa.

It didn’t take long for Genaro to meet Mestre Paraná (Osvaldo Lisboa dos Santos), with whom he learned to play berimbau. Paraná often assumed the direction of the orchestra (bateria) at Artur Emídio’s roda, and Genaro accompanied him. He was an excellent tambourine player, and he also played berimbau at the roda and in the presentations. Genaro participated in the excursions of this group of capoeiristas and percussionists when invited by Abraão Medina to take their art to countries like Portugal, Mexico, Germany, and France, among others.

In one presentation in Rio with Tom Jobim, Caetano Veloso, Maria Bethânia and other MPB (Música popular Brasileira, Popular Brazilian Music, a broad musical style created in the 1960s) musicians and composers, Genaro, in the heat of the moment, composed a new version of “Paranaê”, which is a traditional song in the public domain. Taking advantage of the chorus with the same name as his music teacher, he sang the song with new lyrics, referring to Mestre Paraná, who, at the time, had missed the event, causing a great gap in the percussive section and forcing Genaro to assume the direction of the rhythm. In the following video you can find out more about the song’s history and listen to Genaro’s version, sung by no other than the mestre himself.