Celso Pepe was born in Rio de Janeiro, in 1949. His father Hugo Pepe had been a soldier in the Brazilian Armed Forces in Italy, during World War II, and participated in the battle of Monte Castelo, in Tuscany (where joint Brazilian and US forces defeated the German military). Celso Pepe began capoeira in 1957. At the time he lived in a housing estate called IAPC, in the Olaria district, where he was a neighbour to Djalma Bandeira.  Every Sunday he heard the rhythms of the capoeira orchestra coming from the IAPC Community Centre. When he was only eight years old, he escaped from home and went to there, to the Community Centre, where he saw, for the first time, a capoeira class taught by Djalma. He introduced himself and asked to participate. Djalma refused, alleging that he was too young.

He therefore decided to practice on his own, but continued to watch the training and the occasional rodas that took place on Sunday mornings. Here he saw Mestre Artur Emídio and the first generation of his students, from 1956, and also Mestre Paraná. He joined forces with a friend of the same age, Luiz Garcia Filho, nicknamed Pelé, and his brother, Walter Hugo Pepe. These three boys, on their own, trained capoeira movements behind a building of the IAPC, for various months. They tried to imitate all the movements they saw in Djalma’s class. 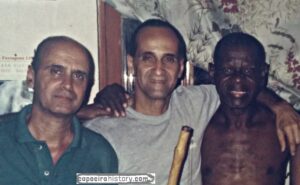 Leopoldina receives Valter and Celso Pepe at their home in Cidade de Deus, Rio de Janeiro, in the early 2000s.

Sometimes later Celso registered with his brother Hugo in the Academia Guanabara, where martial arts and freestyle fighting classes were offered. There Celso Pepe practiced judo, jiu-jitsu and free-style fighting. One day, as he remembers, a thin black man came to the Guanabara Academy, and the teacher Vinagre announced: “This guy is a capoeirista. His name is Leopoldina”. Leopoldina was only 23 years old at the time and was training with Artur Emídio. Leopoldina tried to escape from teaching these boys: “I’m a pupil myself!” But Celso insisted so much that he wanted to take classes with him, that Leopoldina ended up accepting to give them a training next Sunday, under an almond tree in the pátio of the Guanabara Academy. Therefore, according Celso Pepe, the first students of Leopoldina were those three boys: Hugo, Pelé and himself. 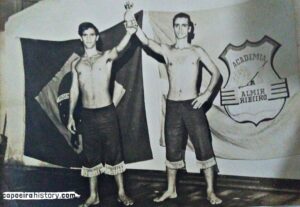 Mestres Celso and Valter Pepe, at the Almir Ribeiro Academy, in Tijuca, Rio de Janeiro, in 1962.

Mestre Celso Pepe thus learned simultaneously from two students of Artur Emídio: He took classes with Leopoldina and watched Djalma Bandeira’s classes and rodas. When he started to get better in capoeira, and was already a bit older, Djalma invited him to train with him in his academy, and to practice with a punching bag. That is why Mestre Celso Pepe affirms: “Everything I learned from looking at Djalma was the São Bento Grande game, and then I learned from Leopoldina the Angola game, São Bento Pequeno. I therefore learned two different styles at the same time.”

From 1959-60 onwards Leopoldina and Djalma Bandeira invited Celso Pepe to perform with them at various events. He went to these venues with the authorization of his parents, Leopoldina and Djalma being in charge. He performed various times with Djalma for TV Rio, in the programme of Carlos Imperial and also for other broadcasters, such as TV Tupi, in the weekly programme “Em Guarda”, with Contramestre Paulo Russo (a student of Djalma). Since these broadcasters were always looking for novelties, and almost nobody knew capoeira at the time, they often invited them to perform on TV or at other events. Celso participated in a caravan of fighting shows, the first “Feira da Providência” (a philanthropic market) and the first samba school parade that featured capoeira. The latter took place in 1961, with M Leopoldina, to the theme “Remembrances of the Old Rio” of the Mangueira Samba School. Later he accompanied Leopoldina to perform at the Cacique de Ramos, as recorded by the Diário de Notícias, in 1965. 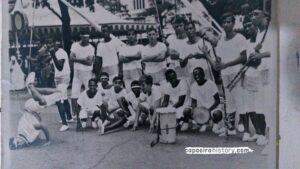 M. Valter Pepe is at Queda de Rins and M. Celso Pepe, from right to left, is the second berimbau, supported in a vertical line on the ground.

In 1968, the samba enredo of Imperatriz Leopoldinense said: In exalting you Bahia, At your fairs, the famous capoeiras, To the sound of the tambourine and berimbau, They demonstrate dancing and singing that you are indeed original. Beribá is stick to make berimbau (bis)
In 1961, Celso Pepe decided to follow his own path in capoeira. At the time he was following the carnival group “Sai como Pode”, based in Ramos. He started to teach his first capoeira classes here, to a group of about twenty adolescents and children. Although he did no longer train with Leopoldinia, he still continued to perform with him. Celso Pepe combined the styles of is two teachers in his own classes, and called his style “Cariocan capoeira” (Carioca means from Rio). According to his own words, it is “a game that is low, high and in the middle, with flexibility, and respecting the origins”. Celso Pepe taught many students – hundreds as he claims. One outstanding characteristic is that he taught in many places, set apart through geography and social background. He started to teach at the Academia Líder, in Duque de Caxias, and later at the Imperatriz Leopoldinense samba school, in Penha; he taught in Tijuca, Copacabana and in the “Complexo do Alemão”, an area comprising different slums near Ramos. As he states: “I managed to get in trouble, because I did not shut myself up in one single space”. In the Alemão Complex he confronted a drug gang and had to leave. In the Orfeão Portugal Club, in Tijuca, he had to face a gang of karate fighters. In Copacabana he taught at the Radar Sports Club, and in the Presbyterian Church in Barata Ribeiro Street. In the Penha neighbourhood, his students – among which Mestre Touro – were known as the “hairy pupils of Pepe”, whilst his middle-class students in Copacabana were called “Master Pepe’s playboys”.

Mestre Celso Pepe emphasizes, however, that he started to learn capoeira in difficult times. Capoeira was still very discriminated. He remembers being insulted, spit at and even arrested just for hanging out in the street. His father called him a vagrant, because he wanted to make a living from capoeira. Hence, when he got married, aged 28, he passed his driving license and started earning his living as a taxi driver, a profession that sustains him until today. He never abandoned capoeira, however, and taught it until 2003.