Masterhood in capoeira was informal for a long period of its history. During the Brazilian Empire, and the times of the capoeira gangs (maltas) in Rio de Janeiro, young capoeiras (caxinguelés) learned on hills or on beaches under the supervision of older and more experienced practitioners. The chronicler Melo Morais Filho already considered the latter to be ‘masters’ (2002, p. 329), even though he condemned their actions. Many capoeiras famous for their dexterity, exploits and mandinga lived before 1930. The fame of Besouro in Bahia, Nascimento Grande in Pernambuco and Manduca da Praia in Rio de Janeiro lives on even today. 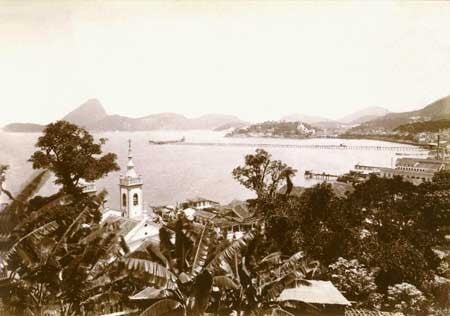 Beach of Santa Luzia, ca. 1893/1894. View from the former Castelo hill. Capoeira was taught during the 19th century on the beach in front of the Santa Luzia church (in the foreground). Photo by Juan Gutierrez (1859–97)(Museu Histórico Nacional – Wikicommons)

Only a group of capoeiras from Bahia born around the end of the 19th century, and still alive in the 1930s, became known and were recognised as masters (mestres) of the art by a wider audience. Aberrê, Antônio Maré, Bimba, Pastinha and Samuel Querido de Deus are the best known of this first generation of modern capoeira mestres, followed by the generation of Cobrinha Verde, Juvenal, Noronha, Onça Preta, Paraná and Waldemar.

A number of these practitioners came to Rio de Janeiro to display their art, thus contributing to the dissemination of Bahian capoeira. Out of these, only Paraná (Oswaldo Lisboa dos Santo) and Cícero Navarro – better known as Onça Preta (Black Panther) – settled in Rio de Janeiro. Onça Preta was born in 1909 and came to Rio in the 1950s, where he died in 2006. Paraná was born in 1910 or 1911, came to Rio in 1945, and died there in 1972. Another Bahian of their generation, Joel Lourenço, also played an important role in capoeira in Rio in the 1950s.

A whole generation of capoeiristas born in the 1930s joined these three to form the core from which contemporary capoeira developed in Rio de Janeiro: mestres Artur Emídio, Leopoldina, Mário Buscapé, Djalma Bandeira, Roque, Paulo Gomes and Celso do Engenho.

An older, or premodern, lineage of capoeira from Rio also exists, though less visible. Madame Satã (1900–76) and Quinzinho, the teacher of Leopoldina, are the best known of this generation, which still managed to transmit something to modern capoeira. We know next to nothing about Quinzinho or his companions such as Sete Coroas.

Following over a century of repression and stigmatisation, capoeira has undergone a process of institutionalisation ever since the end of period of the Estado Novo (1937–45). The capoeira federations created in many states of Brazil during the 1970s are examples of this process, which also generated polemics and dissension, to the extent that the biggest capoeira groups are not part of this institutional structure. More recently, capoeira was recognised as ‘intangible cultural heritage’ by the Brazilian state (2008) and by UNESCO. After listening to many mestres during the process of patrimonialisation, the Brazilian National Institute of the Artistic and Historic Patrimony (IPHAN) affirmed that the knowledge and the practice of capoeira as culture required recognition and dissemination. IPHAN made two entries in the register of the intangible cultural heritage of Brazil: the capoeira circle or roda, and the knowledge of the capoeira mestres. It emphasised that ‘the aim of the registry […] is to value the history of Black resistance in Brazil, during and after slavery’ and that the recognition of capoeira as a heritage ‘signals awareness of the value of the African cultural heritage’ (2017, p. 9).

The website capoeirahistory.com adheres to these objectives. In this section of the site, the aim is to valorise the contribution of those mestres who were protagonists in Rio de Janeiro, many of whom have been forgotten, in particular by younger capoeiristas. This will be accomplished through mini-biographies and documentary clips. We also intend to contribute to reflection about capoeira genealogies and genealogical narratives.

There is a consensus that four capoeira lineages were the main influences in the formation of Contemporary Capoeira in Rio de Janeiro: those of Artur Emídio, Paraná, Mário Buscapé and Roque. According to M Levi, these four ‘started to work in closed spaces of academies, introduced uniforms, organisation, etc. From these four the majority of capoeira masters here in Rio de Janeiro derived’ (interview, 5.9.2018). Another important player in this process was a group which initially had no master: the Senzala. The dynamics of interaction between these four lineages, mainly located in the northern area of the city and the Baixada Fluminense, and the Senzala group, based in the southern zone, explain the development of Contemporary Capoeira in Rio de Janeiro.

In this ABC, we attempt to rescue the names of capoeiristas active in Rio de Janeiro during the 1950s and 1960s (and we will subsequently include the 1970s and 1980s). In the absence of a consistent historiography, we gathered information from interviews, newspapers and various websites, such as the biographies written by Jefferson Estanislau da Silva from FCDRJ. We also benefited from the help of our consultants, in particular M Bebeto, André Lacé, Paulão and Soldado, to draft these entries. Some may be very short, but hopefully they will still be of use those who want to know more about the capoeiristas of the past in Rio de Janeiro, and the impressive history that so much contributed to capoeira disseminating around the world. This is only a beginning. Corrections and additions are welcome:email capoeirahistory@gmail.com

Short biographies of Bahian mestres can be found at www.velhosmestres.com