Have you heard about mestre Paraná? If so, did you know that he recorded one of the first capoeira commercial albums in the early 1960s?

Field recordings of capoeira music date back to the 1940s when American linguist Lorenzo Dow Turner visited Bahia and recorded a number of capoeira mestres, including Cabecinha, Bimba, and Juvenal (1940-41). In subsequent decades other researchers such as American Anthropologist Anthony Leeds (1951) and French Anthropologist Simone Dreyfus-Roche (1955) continued this sonic documentation providing precious material for our understanding of the historical development of capoeira musical aesthetics.

The first commercial albums dedicated to capoeira only appeared in the 1960s. Curso de Capoeira Regional by mestre Bimba (1962) and Capoeira da Bahia by mestre Traíra (1963) became references for the capoeira community, the former for practitioners of the Capoeira Regional style and the latter for angoleiros. In 1967 Camafeu de Oxossi released Berimbaus da Bahia, an album combining Candomblé and capoeira. Finally, in 1969 appeared Capoeira Angola: Mestre Pastinha e sua Academia and in 1973 Academia de Capoeira Angola São Jorge dos Irmãos Unidos do Mestre Caiçara, the latter combining capoeira and samba-de-roda. Yet, an album recorded as early as 1963 by another Bahian capoeira mestre known as Paraná, has been largely consigned to obscurity. 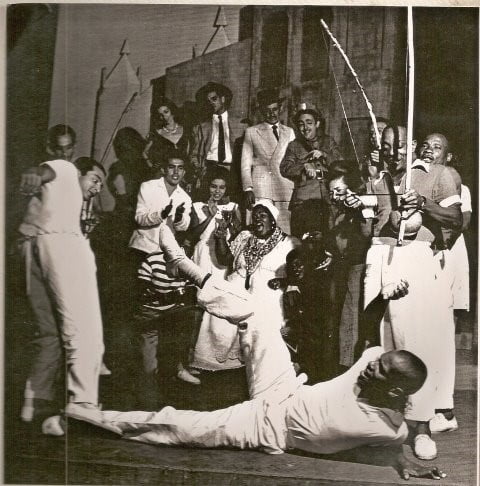 Oswaldo Lisboa dos Santos (1922-1972), also known as mestre Paraná, was a Bahian capoeira mestre who developed most of his career outside of Bahia. In 1945 he moved to Rio de Janeiro and in the mid 1950s formed a folkloric group called Conjunto Folclórico de Capoeira wich eventually became the São Bento Pequeno Capoeira Group. According to Andre Luiz Lacé Lopez, Paraná invited other two Bahian capoeiristas to record his album: Mucungê and Santo Amaro. In a separate statement, Mestre Gege, another Bahian capoeirista, confirmed Mucungê’s participation, but claimed that the second that musician invited by Paraná was Bahian Onça Preta.

Capoeira commercial recordings in the 1960s emerged in a moment when a national interest in capoeira was sparked by a series of films featuring capoeira, such as Robatto Filho’s Vadiação (1954) and particularly, Anselmo Duarte’s O Pagador de Promessas (1962) and by the advent of folkloric groups featuring capoeira along other Afro-Bahian expressions. Duarte’s film was based on Dias Gomes drama with the same title, which had been staged in São Paulo in 1960 and in Rio in 1962. Paraná’s profile was raised thanks to his own folkloric ensemble and his participation playing the berimbau in the Cariocan version of the play. Nonetheless, his prolonged physical absence from the capoeira scene in Bahia, the epicenter of capoeira up to the 1960s, likely accounts for the obscurity of his album.

Paraná’s Single was recorded in Rio De Janeiro and released by CBS in 1963 as a EP 45 that only allowed about five minutes of recorded music per side. The recording features four tracks entitled “São Bento Grande,” “São Bento Pequeno,” “Angola,” and “Avise a meu Mano.” While the former three are purely instrumental and use the names of well-known berimbau toques, the latter features a popular capoeira corrido accompanied by the capoeira bateria. In this sense, mestre Paraná aligned with Traíra’s and Bimba’s albums and together set a trend for future recordings: some tracks consist of traditional berimbau toques and others are capoeira songs accompanied by the capoeira bateria. But different to other albums from the 1960s, and probably due to lack of space, Paraná recorded only one corrido, rather than the typical sequence of ladainha-chulas-corridos. 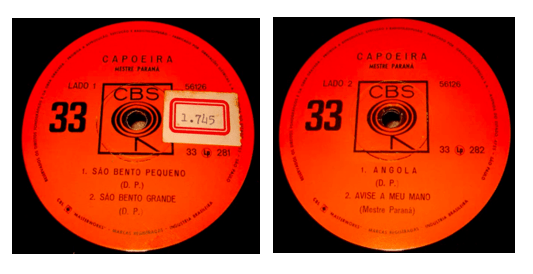 There are some generalities cutting across the four tracks of Paraná’s album. First, the bateria consisted of one atabaque, at least one pandeiro (maybe two), and three berimbaus (which we will call gunga, medio and viola according to the most used terminology today). Paraná paid close attention to berimbau tuning: in the three instrumental tracks each berimbau maintains a relatively fix pitch: viola (Db4 – Eb4), médio (B3 – Db4), and gunga (Ab3 – Bb3). Interestingly, in the last track Paraná unified the tuning of the berimbaus in Ab3 – Bb3 to accompany song.

The second generality is concerned with the normative roles of each instrument. As in any capoeira bateria, the atabaque and pandeiro(s), provide a stable rhythmic bed in 2/4 meter for the berimbaus, which in turn, lead the ensemble with plenty of freedom to improvise. Each toque is formed by a complex texture of three berimbaus that sometimes aligns vertically but, more frequently, interlock. In each of the instrumental tracks the berimbaus tend to start in a relatively stable fashion, articulating patterns that identify the toque. Over time the texture becomes busier and more complex with multiple simultaneous improvised variations by the three bows. Contrary to contemporary practice viola always begins and is followed by either medio or gunga.

Tempo variates remains relatively stable throughout each individual track, but varies between tracks. Predictably, the slowest is the track entitled “Angola” and the fastest “São Bento Grande.”

Below is a transcription in box notation of the most characteristic patterns featured in Paraná’s instrumental tracks:

As stated, this is the only track in Paraná’s album featuring song, in this case, the corrido “Avise a meu mano,” which is commonly heard in rodas of all styles. As all capoeira corridos, the form is in call-and-response and in this recording, the refrain is repeated twice before the soloist call. Below are the lyrics. 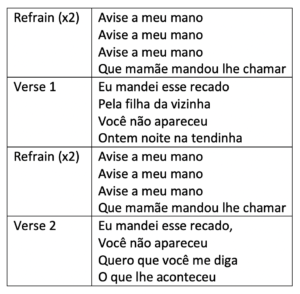 Three interesting features appear during the song. First, while viola and medio stay in the fix pattern shown above, gunga alternates between ostinato and variation in a consistent manner in relation to the song form: it plays the pattern shown above during the refrain, and it plays triplets in the open string during the solo vocal part (see song transcription below). This gunga alternation is consistent throughout the six call-and-response exchanges of the corrido. Second, during the choir section, the voices form parallel harmonies (mostly thirds). And third, tuned in unison, the open berimbau notes (Ab) function as fundamental pitch for the song. 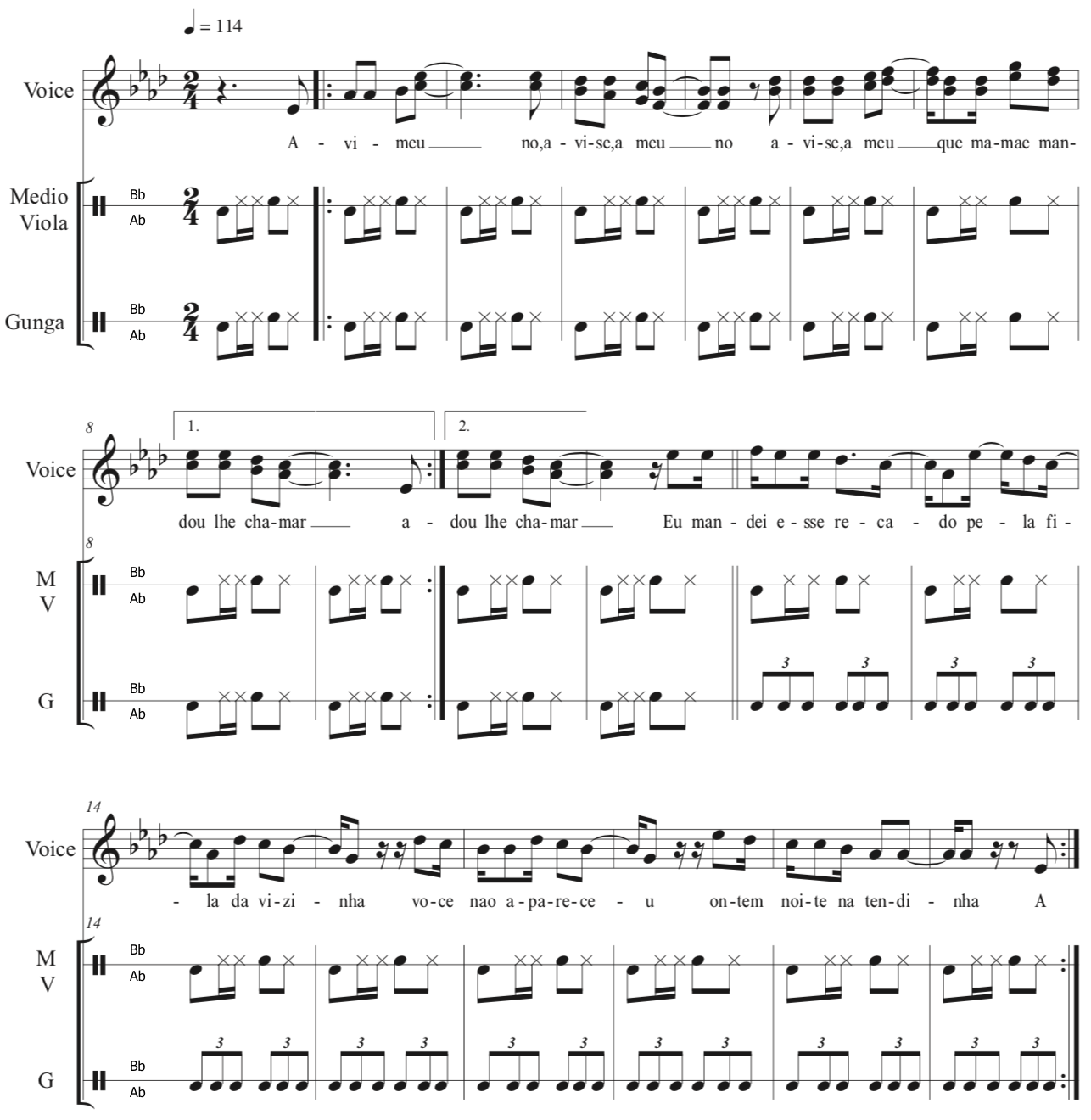 Clearly Paraná adjusted the tuning of the berimbaus to sing in tune with them—he tuned all berimbaus in Ab-Bb and sang in Ab major. Had he kept the tuning of the instrumental tracks, various berimbau pitches would have “clashed” with the melody, most notably, the open note of medio (B), which clashes with a key component of the Ab major triad.
Paraná’s concern for berimbau tuning and song melody is also present in the recordings of most of his contemporaries. In his track, “Santa Maria,” for instance, Traíra tuned the three berimbaus as follows: berra-boi (F3-G3), gunga (G-Ab), and viola (Bb3-C4) and with this tuning, the mestre sang the ladainha in F minor. Notice that the lowest bow pitch (F) functions as the tonic and all other pitches belong to the F minor tonality, including the three components of the fundamental triad (F, Ab, and C). In “Quadras” and “Corridos,” mestre Bimba tuned his berimbau F# – G# and sung using most of the pitches of the G# major scale. Caiçara used two berimbaus for the sung tracks and tuned in unison (A3 – B3). He utilizes these pitches as fundamental for singing: In the first track he sings in B major and in the second one in A major. In “Quem quiser moça bonita,” Camafeu de Oxossi tuned gunga in G3 – A3 and viola in C#4 – D4 (although viola only plays the low note) and sings in E minor. Although none of the berimbaus play the fundamental, all the bow pitches are contained in the E minor scale and the open gunga note is the major relative of E minor. All these recordings from the 1960s demonstrate consistency in their concern for berimbau tuning and song melody, although each mestre materialized such concern in different ways. Interestingly, Pastinha, deemed the guardian of Capoeira Angola, departed from this logic in his album. In the first track, the berimbau is tuned as C3 – Db3 and Pastinha sings in what seems to be G major.
It is important to notice that attention to precise berimbau tuning is not necessarily reflected in capoeira rodas, where singers with different levels of skill, experience, and vocal register take turns to lead corridos. Furthermore, in a live roda, berimbaus’ strings often break and are replaced on the spot by other bows that may be equally tuned or not. However, the consistent attention to tuning demonstrated in these recordings perhaps reveal an ideal musical aesthetic that mestres hold and can only control in recordings.