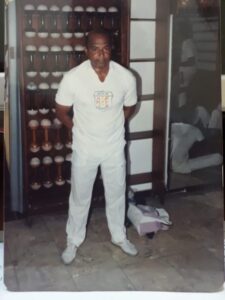 Artur Emídio de Oliveira was born in 1930 and spent his childhood in Itabuna, Bahia, where he completed secondary school. According to his own testimony, he learned capoeira ‘in the street, on the pavement’, from the age of seven, with his ‘master’ (mestre) Teodoro Ramos, known as ‘Paizinho’. After the death of Paizinho in 1945, Emídio took over his capoeira academy, even though he was only fifteen at the time. Despite his youth, he started teaching Paizinho’s former students and soon became well known, even receiving a visit from capoeira students from Salvador.

Artur Emídio left Itabuna in the early 1950s, when he was around twenty years old. Roberto Pereira (2018, pp. 7–8) suggests that he was motivated to leave after reading in a magazine about fights between practitioners of capoeira and jiu-jitsu. He first went to São Paulo, where he challenged fighters of various combat sports. He stayed in São Paulo for about a year, and in 1953 moved to Rio de Janeiro (Lacé 2002, p. 226).

Artur Emídio’s trajectory in both São Paulo and Rio de Janeiro was shaped by his fights in the ring. In his first documented fight, on 29th June 1953, he confronted Rudolf Hermanny, a student of Sinhozinho, and lost by knock-out. Maybe for that reason he attended the Gracie academy in Rio, and learned some jiu-jitsu techniques. He thus became a practitioner of what was known at the time as luta livre, or free-style fighting. Neverthless, Artur always asserted the superiority of capoeira over other martial arts. Among the issues involved in these fights between different combat forms were the questions of dress, and of which attacks were or were not permitted. Artur refused to wear a kimono and demanded to fight in shorts and trainers; he also wanted to be able to use whatever attacks were allowed in capoeira.

Artur Emídio and Robson Gracie were the protagonists in one of the most famous fights in the ring, on 13th April 1957. That day, the Diário Carioca reported, Artur Emídio was ‘brought to the ground at the very beginning’ and subjected to ‘strangling from behind’. The fight only lasted four minutes. Such defeats motivated him to find other paths for his martial art and his career as a capoeirista; at the same time, however, the experience of the ring shaped his style – quick and objective. Mestre Burguês, who got to know him in the 1970s, described his style as follows: ‘I saw him teaching on several occasions: he had a great concern for objectivity and efficiency in capoeira. Capoeira is fighting, but the capoeirista needs to always seek to go to ground, dodge and avoid direct confrontation, like the guy kicking and wanting to block attacks.’ ‘Entries’ and velocity therefore came to characterise Artur Emídio’s style. As Mestre Silas recalls, ‘The symbol of Artur Emídio was the bolt, because he was so fast.’ 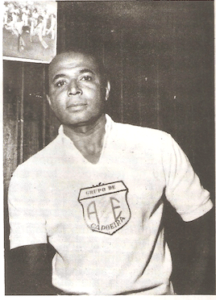 From the 1960s onwards, Artur Emídio abandoned the ring and dedicated himself exclusively to capoeira. He took great care of his school (academia), gave displays throughout the city, acted as judge in capoeira competitions (such as the Berimbau de Ouro) and got involved in the Cariocan Federation of Pugilism, which began the process of the institutionalisation of capoeira, formalising its practice and establishing rules. He also worked as a masseur. According to Mestre Gegê, Artur was proud to have treated Martha Rocha after she won the Miss Brazil contest in 1954.

He started to give classes in the free-style academy of Waldemar Santana, in the Higienópolis neighbourhood. This school was located above the Rio Novo pharmacy, at Democraticos Avenue 1313, where he also worked as a masseur. Shortly afterwards he established his own capoeira academy in Manuel Fontenele Street, just behind the pharmacy. At that time there were very few places in Rio de Janeiro where one could practise capoeira, and the Academia de Capoeira Artur Emídio was one of the first in the city. The Sunday roda in Artur’s academy played a crucial role in the development of Contemporary Capoeira in Rio de Janeiro, and in Brazil, because it was a meeting point for capoeiristas of various styles. As Mestre Paulão recalls, ‘Mestres from all over Brazil came to the roda of Artur Emídio, […] here the suburbs, the northern and the southern zones [of Rio] congregated, it was an eclectic capoeira’. Excellent berimbau players such as Mestres Paraná and Mucungê joined the orchestra of the roda.

Artur Emídio stood out as a mestre who disseminated capoeira in a wide range of public spaces and media, from classes and shows to TV programmes. ‘If the Brazilian government supports me’, he claimed in an interview given to the Revista do Esporte in 1959, ‘I will show that there is no other sport as beautiful or physical exercise as perfect for the human body as our capoeira.’

With Djalma Bandeira (one of his first ‘disciples’), he presented himself on stage in a folkloric show called ‘Skindô‘. The cultural entrepreneur Abraham Medina engaged them as part of a show featuring the romantic singer Nelson Gonçalves that toured in New York, Paris, Acapulco and Buenos Aires. Artur can also therefore be considered a pioneer of the globalisation of capoeira.

Artur Emídio had a number of students who became important mestres in their own right, such as Djalma Bandeira, Paulo Gomes, Mendonça, Leopoldina and Roberval Serejo. He thus managed to transmit to new generations his style and his agility, characteristics that shaped the emerging Contemporary Capoeira.