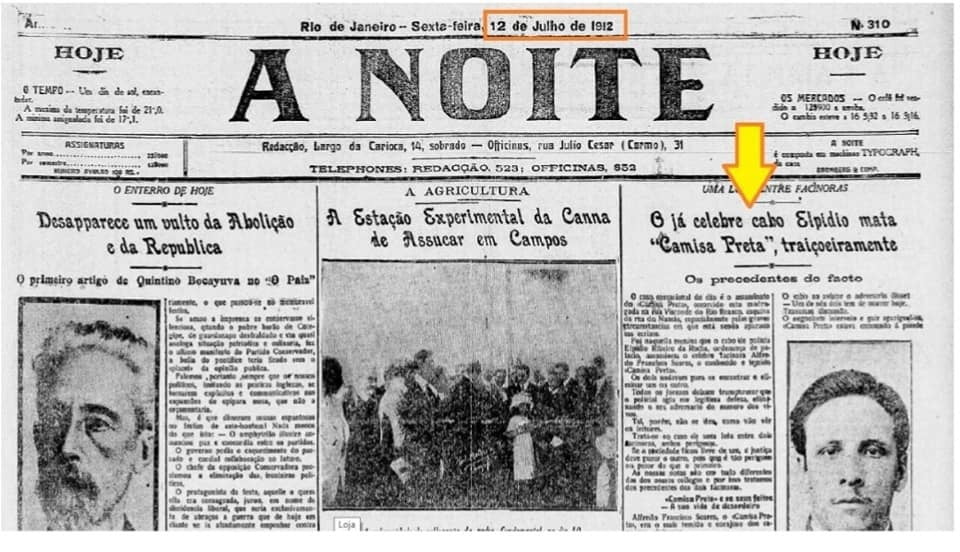 Miguel Camisa Preta (= Michael Black Shirt) was a capoeira, a rogue, a bohemian. A survivor in the streets and ghettos of the universe of the old capoeiras in Rio de Janeiro. Alfredo Francisco Soares was his baptismal name, one of the most famous names among the malandros in the Cariocan streets, at the beginning of the twentieth century.

Miguelzinho Camisa Preta, as he was known, by the police as well as by the other rogues, was a landmark and left his name in the history of capoeiras, malandros and tough guys that populated the bohemian streets of the “wonderful city” at the beginning of last century.

According to the newspapers A Gazeta de Notícias, and A Noite, Miguel Camisa Preta was assassinated in the dawn of 12 July 1912, a Friday.

WHERE HE WAS KILLED

The rogue was assassinated in the Rua do Núncio, near the actual Tomé de Souza and Visconde do Rio Branco avenues. Around one o’clock in the morning.

THE REASONS FOR THE DEATH OF CAMISA PRETA

The police officer Elpídio Ribeiro da Rocha appeared on the location, a declared enemy of Camisa Preta. Some years ago Elpídio had killed the malandro Leão do Norte (Lion of the North), a tough capoeira from the streets, and a great friend of Camisa Preta. Camisa Preta had sworn vengeance and had confronted the policeman already twice. In one of them, they both ended up at the police station, with Camisa Preta wounded by a shot in the leg. In this last and decisive confrontation, in the night of 12 July, the policeman and his fellow officer, both armed, supposedly killed Camisa Preta as he raised his arms. Both apparently had offered guarantees to the malandro that they would not shoot. However, as soon as Camisa Preta raised his arms, Elpídio shot him in the head. That was the end of the most famous tough guy, bohemian, capoeira and malandro which inhabited the universe of the streets of Rio de Janeiro at the beginning of the twentieth century. 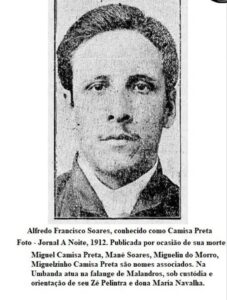 Miguelzinho Camisa Preta became a spiritual entity in Umbanda, worshipped in various corners of Brazil. In his “phalange” (or family of entities), he introduces himself with various names, depending on the place: Miguelim do Morro, Mané Soares…

There are other versions about the history of his life, death and after-death. Due to my respect for each medium and spiritual leader working with this phalange, I want to make clear that I only used newspaper articles from the newspapers cited below, which were published on the day after his death.