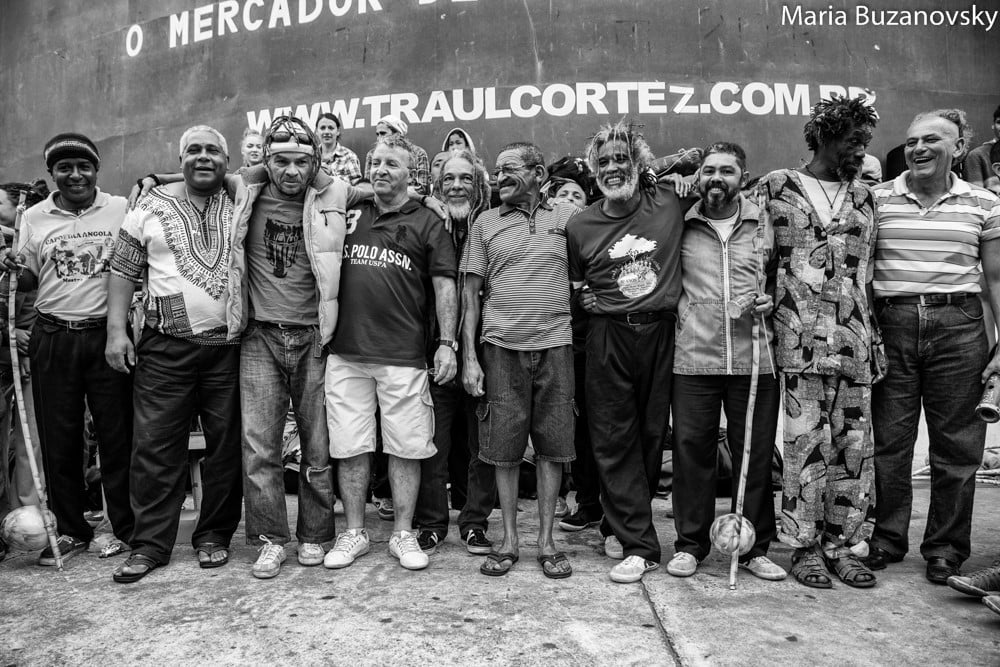 Capoeira street rodas are documented in Rio de Janeiro since the famous engraving based on a watercolour by Johann Moritz Rugendas, first published in 1835. Due to systematic repression at the beginning of the Republic, in 1889–90, capoeira vanished from public spaces in the city, but it reappeared after the end of the Estado Novo in 1945. During the 1950s, 1960s and 1970s, various street rodas took place regularly in Rio. The most famous of these were at Quinta da Boa Vista, during carnival at the Central Station and during the celebrations for Our Lady of Penha.

The Caxias Roda is the oldest street roda still in progress in Greater Rio de Janeiro, having existed without major interruption since 1973. It has become an institution and a symbol of the strength of capoeira tradition in Rio. It is therefore appropriate to pay the ‘Caxias Free Roda’ this photographic homage, documenting the celebration of its 40th and 45th anniversaries, in 2013 and 2018 respectively.

Maria Puppim Buzanovsky took a degree in history at the Federal Fluminense University and is a professional photographer. She has been documenting Afro-Brazilian cultural forms for the last ten years, with capoeira as a central focus of her work. She has participated in various exhibitions in Brazil and abroad, in particular ‘Memórias do Valongo: Capoeira, Identidade e Diversidade’ (Museu Janete Costa de Arte Popular, 2013), ‘Do Valongo à Favela: imaginário e periferia’ (Museu de Arte do Rio – MAR, 2015) and ‘Passinho de Angola’ (Centro Cultural dos Correios, 2015).

Maria was present at the 40th– and 45th-anniversary celebrations of the Caxias Roda. The pictures she makes available in this virtual exhibition portray many of its founders, but also some of the newer generations. It was not possible to portray everyone in the sample, but we believe these pictures provide a wonderful record of some very special moments of the roda for those who could not attend, and a precious memory for those who participated.